Hi everyone,
I just wanted to share a new edition to my laser collection.
And its a big one, and it’s courtesy of Chris (Laser_Project).
I wanted this laser a few years back when I first saw it listed on eBay.
Unfortunately it never happened, firstly because Chris’s circumstance had changed,
and secondly I couldn’t honestly justify spending my university grant on a laser.
Well, to cut a long story short I got a message of Chris to say I had a parcel on it’s way.
Imagine my shock when it turned out to be this laser.
So I just want to take a time out on this thread and say thank you.
He not only sent me the laser but also went out of his way to assist me in receiving and powering up the unit. [image]

This is the MGL-W head from CNI, so it is a beast even before powering it on. These heads are fitted with a large heatsink and two internal fans to dissipate the heat away from the TEC cooled components. These heads are capable of handling 20W of 532nm comfortably. So thermal stability is no issue whatsoever. The head according to the spec sheet is 6.1kg in weight. I haven’t measured it myself, but I don’t doubt it for a second. For anyone wanting to learn more about the host.
Here is the PDF: http://www.cnilaser.net/PDF/MGL-W-532.pdf

The PSU is what appears to be a older/discontinued model of the FDA drivers.
It comes with a safety interlock, a key switch and an emergency stop button for safety purposes.
The PSU is only compatible with 110V, which at first presented a problem for me in the UK. Cyparagon had ways of getting around this, but 2000W transformer solved all my issues simply and effectively.

Now for the actual output.
First thing that comes to my mind. Bright!
Unless you’ve seen high power 532’s before, nothing can prepare you for the shear intensity of 4.25W of glorious green photons.
I have a 500mW 532 outputting close to 600mW, and I thought that was bright. I have 4W NUBM07’s, and 7W NUBM44’s and they don’t compare either.
It may not be my most powerful laser, but it is my brightest… by a long way. And the power burns anything it touches similar to a NUBM44, just slightly slower.
I managed to burn through gloss white laminate which was reflecting most of the light.

Just for fun I worked out the lux equivalent to sunlight (130,000 lux). The laser has a 5mm guassian dot and a divergence of 1.5mRad. So at 100mm from the aperture these are the values for the dot intensity. Luminous efficacy was fully counted into the equation and so was its true output of 4.25W.

These values might actually be higher, as I haven’t actually measured the beam diameter properly myself. The spec sheet states ~4mm. So taking this into account the intensity will be much greater than stated.

So, bright it is.

Here are some pics for you to enjoy. 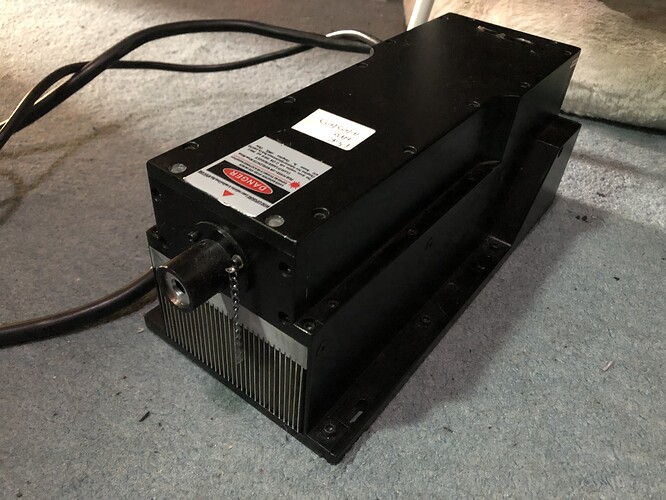 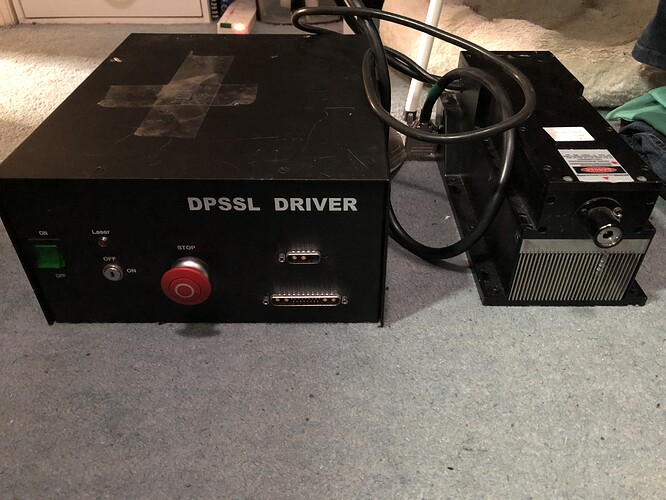 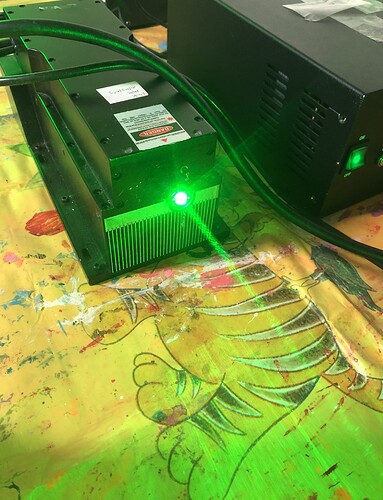 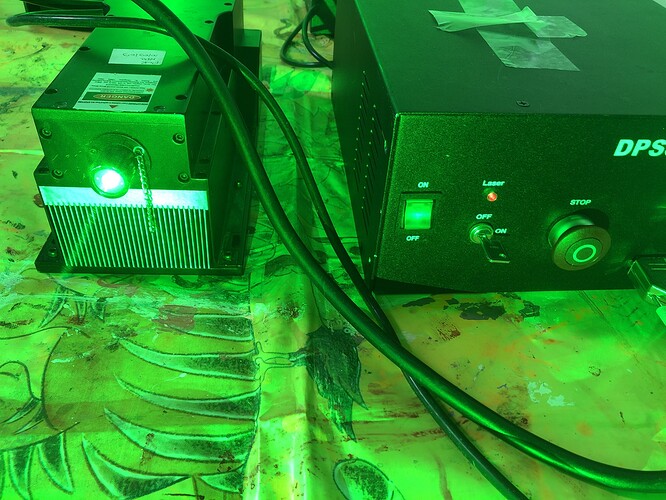 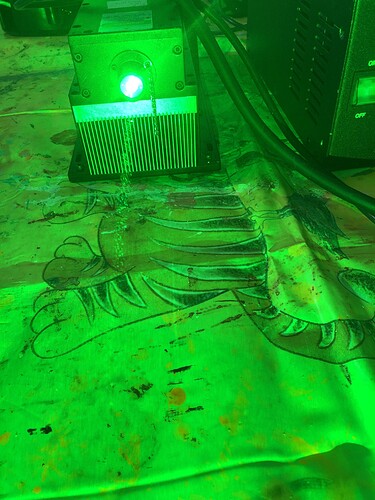 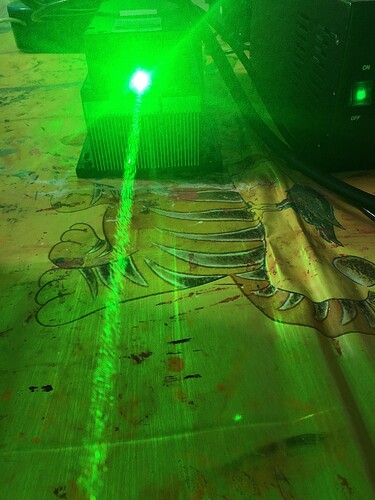 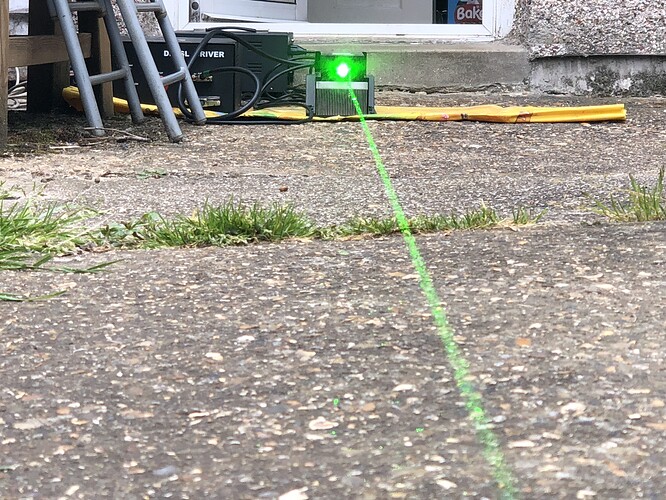 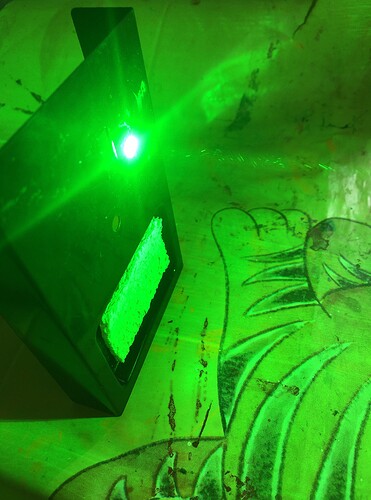 Nice to see that here, I used that 4 watt in Alaska and pointed strait up into the night sky (far from an airport) and it sure did a good job of getting attention, too much! Due to that I only did so a few times. I have a new one now, of course I had to buy a more powerful one.

Hope you don’t mind my sharing a link to a video of mine:

I can imagine you got attention. I would get attention here if I just shone it at a spot in my garden at night. My garden would glow green.
It’s such a shame that I can’t safely get a beam shot in the sky. Unfortunately I live in a busy flight path of London. If pilots are scared of a 5mW pointer they would be petrified that a terrorist is trying to take them down with that thing.

I bet, I was in a town of near 400,000 but in an outlying neighborhood. If I were in what we call the bush in Alaska, then no problem, but Anchorage and I had people driving to my house to see what it was.

Lol. That is not the attention I could risk getting. I have to remind myself that the laser is of a event/professional power range therefore will attract attention like so.

WOW!
I can imagine the joy when you opened the box

Chris that was an amazing gift

It was/is an amazing gift. The laser is unimaginably bright. I can only therefore imagine how bright that 10W Chris has now got.

Was the laser in the box that was suppose to be a spectrometer?

This is actually something I’ve had for a while Peter, its one of my posts I have migrated over from LPF.

OK got it, but still sweet!

Thanks to Chris on that one.

Something that impresses me about it is its daytime beam visibility. Depending on conditions the beam can even be seen looking in the direct the laser is going.

Yeah I saw that outside day time beam pic!!
That is BRIGHT!

It is insane. I wish you could get an idea of what it is like in person. I have a 500mW 532 lab, and it makes it look like an ebay pointer lol

Can you use it somewhat easily where you live?

I wouldn’t say I could use it easily.
I live in a suburban town surrounding a major city. So you can imagine we get air traffic and we are not population sparse. However, in my garden I have used it. I’ve also had fun popping balloons at the other end of the garden too. lol

Truth is, the difference between 4 and 10 watts is not as great as many would think, maybe close to twice as bright at 10 watts. As far as the spot on the wall goes, it’s too bright to see any difference with the eye, my eyes are over saturated with green power at 4 or 10 watts. My next project is building a LD combined 525 nm laser pointer which can do 10 watts, I have most of it ready to mill now, all of the parts in hand.

I was happy to do that for Curtis instead of leaving it in a storage Conex, as I would have otherwise done for who knows how many years in storage.

That 10W 525nm will be insane! That will be one bright handheld. Brighter than Styropyro’s laser bazooka I can imagine. Because for one, you will be aligning them better, and two 525nm dwarfs the 450nm from the diode array he used.

Yep, it should do well, I had a special mirror substrate shape cut out of natural quartz, I just need to get it mirrored now, I had 20 of them made and already received them. If this works, others can get some from me but having them mirrored alone is 650 dollars all together, minus shipping costs. Each crystal was 30-40 dollars each, depending upon diameter, they are from 25 to 40 mm.

I could actually do more power if I added more diodes, but then the battery supply pulls too much current for even good high current 26650 cells, three in series. I have a controller being made now to be able to adjust from low to full output using a rotary digital controller pot in 64 steps (that will probably be reduced to 12, it is just a programming function).

I am going to try to fit all of this into a 70 mm wide OD host chamber I had made in Vietnam by Tungh but heat management is a real challenge, must use copper heat pipes in this baby.

That is a costly move you made, hopefully it pays off though.
What you need now is the NUBM44 of green laser diodes to come out.
Battery life and heat dissipation would be two of my biggest concerns in this project.
Looks like you know what you are doing though

Yes, I had 6 x, 8 x and 12 x faceted crystals made, now to get them mirrored. Heat and battery capacity are indeed the big challenge. I want to add a external DC connect to the host for a larger capacity battery pack. Then the only problem is heat which will limit the run time, I do have a way to deal with that too, novel way for a pointer. I won’t incorporate it if I don’t need it, but it certainly would keep the heat down; CO2 cooling.