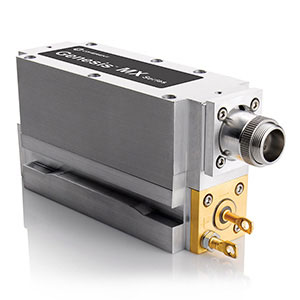 Coherent offers a family of high power lasers for lightshow applications from 460 nm to 577 nm.

Obtain richer, more vibrant colors for your next lightshow with Coherent’s Genesis Taipan family of lasers. Based on our unique Optically Pumped Semiconductor Laser (OPSL) architecture, these lasers have the ability to deliver high output powers at unique wavelengths. With a wavelength range from 460 nm to 577 nm, our high power Taipan lasers come in a variety that fully satisfies all laser lightshow applications. 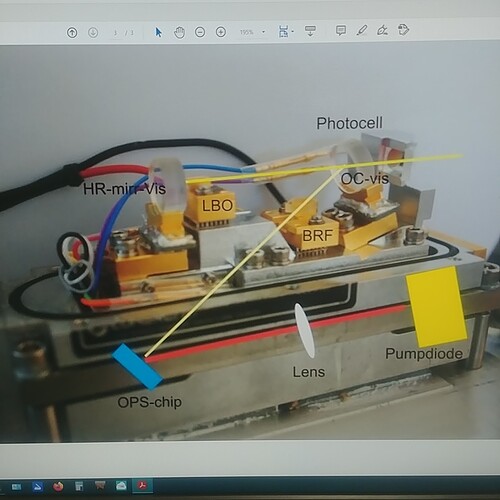 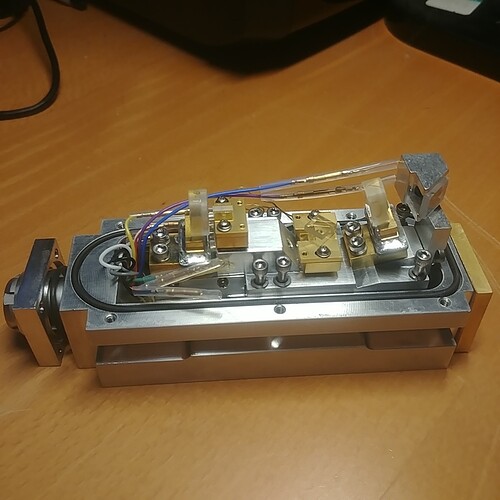 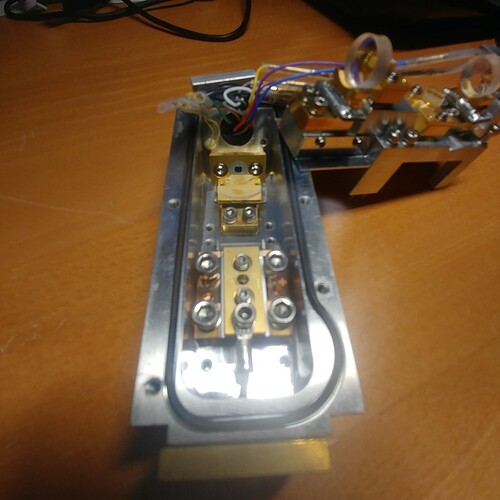 ​Regarding the BRF crystal, I asked I what it was for over at Photon Lexicon and received the following response from mixedgas:

The BRF selects the IR lasing wavelength. The one week class to explain how a BRF picks one and only one wavelength via transmitting a selected polarization requires Calculus. I don’t do Calculus, unless it is the end of the world, and I’m getting triple overtime. Suffice it to say BRF is cool , it is a chuck of X-ray oriented quartz, and has been around since the invention of CW dye lasers. One of my favorite optics to work on. You rotate and tilt it to tune it as well as obtain minimum loss. On a good day they are at Brewster’s angle for the tilt.
~
The BRF produces a intracavity loss to all but the desired wavelength. Gets used in Dye, Ti-Saph, and OPSL. Basically it is a tunable waveplate of a very complex nature and comes in single and triple plate units. It has very low insertion loss.
~
OPSL semiconductor disks can range say 10-100 nm in wavelength. It will lase where it wants to, without the BRF. I assure you it will lase in a wavelength where it is not desired without BRF, and hop around.
~
The OPSL is the same topology as a three mirror dye laser, plus an intracavity doubling crystal. So 577 is starting with 1154 nm IR from the Semiconductor Disk. The nature of a optically pumped, MOCVD grown, strained quantum well, semiconductor crystal is outside the nature of this post. Coherent grows a multilayer crystal with a semiconductor bandgap that does not exist in nature. That custom band gap gets you the “oddball” IR wavelength needed. There are only 2-3 fabs in the world who can grow the wafer needed.

The key features of OPSL

That’s one type of laser I don’t own, well that and metal vapour and chemical. Lol. I need to take that 530 of my signature thinking about it. They are a very good laser technology. That article was a good read.

They are so expensive, even if broken, I still need to fix the three low output ones I have. Asking questions about OPSL on PL, I received this response today:

Rattle, rattle, I’m waking the dead, this is an old thread.

Too bad that link to Laser Focus World no longer works, I’ve been googling trying to find how an OPSL works, I mean, in regard to the pump wavelength. It occurred to me my 577 nm OPSL probably isn’t being pumped by 1154 nm, as I was told by the seller, or more likely I just misunderstood him and he was talking about the wavelength into the LBO crystal. I mean why use OPSL if you can just double the wavelength of 1154 to produce 577?

Edit: Of course, when I post this I soon after find the new link: https://www.laserfocusworld.com/lase…mplaser-market

Although after reading, I still don’t understand what wavelength the IR pump is at in the 577 nm OPSL.

607nm and 639nm are exceptions from “normal” OPSL’s in that they are actually blue output OPSL’s pumping another cavity bolted onto the end, Pr:YLF, to convert the blue light to 607nm (orange) or 639nm (red). That’s what’s in the little bolt on “nozzle” on the end of it.

The corresponding undoubled IR orginal wavelengths are created from the specific design of the OPS chip. They are essentially designed to have a variety of deposited layers to create a useable IR laser for a specific wavelength. This range is about 700-1200nm. If you want 1154nm? You design an OPS chip for that. You want 920nm? You design a chip for that etc. Then stick in a frequency doubler to get your visible wavelength.

So you can pretty much pick any wavelength it’s worth throwing R&D money at to warrant the costs. That’s why most of the OPSL’s you can buy happen to be at useful wavelenths for processes, or identical to power hungry argons they would be replacing etc.

However: you’re absolutely stuck to the wavelength you have for the OPS chip you’ve got; there’s no tunability on the ouptut wavelength.

There is a birefringent and LBO you can tune, but this will not alter the output wavelength.

ALL OPSL’s are 808nm pump; but the spot size and geometry is important for proper beam profiles.
If you have one there, you should get some light out around 12-16A on the diode. Most high power Taipans will output their nameplate rating when ideally tuned and healthy around the 30-36A. Do not exceed 40A. This is the absolute max for the diodes.

There’s a lot more to it, and I’ve omitted many many details, but hopefully the above is what you need to know?

I think I have some 577nm OPS chips in my collection if your one is dead. They are literally hen’s teeth though

If it’s a pump diode that is dead… that is not the usual failure mode unless it has many 1000’s of hours on the clock or a badly set driver.

All the best,
Dan