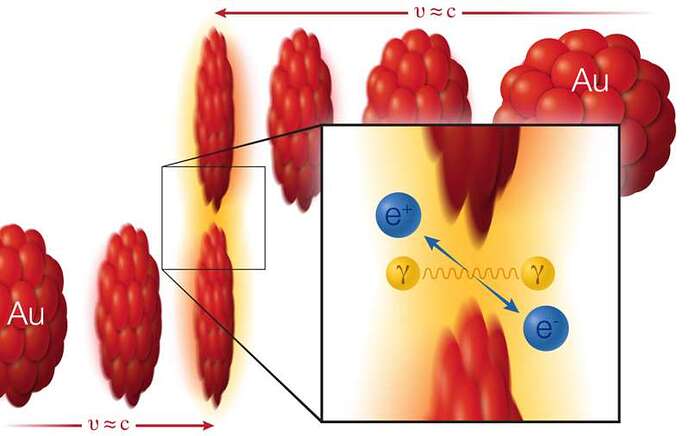 Scientists studying particle collisions at the Relativistic Heavy Ion Collider (RHIC)—a U.S. Department of Energy Office of Science user facility for nuclear physics research at DOE’s Brookhaven National Laboratory—have produced definitive evidence for two physics phenomena predicted more than 80 years ago. The results were derived from a detailed analysis of more than 6,000 pairs of electrons and positrons produced in glancing particle collisions at RHIC and are published in Physical Review Letters .

The primary finding is that pairs of electrons and positrons—particles of matter and antimatter—can be created directly by colliding very energetic photons, which are quantum “packets” of light. This conversion of energetic light into matter is a direct consequence of Einstein’s famous E=mc2 equation, which states that energy and matter (or mass) are interchangeable. Nuclear reactions in the sun and at nuclear power plants regularly convert matter into energy. Now scientists have converted light energy directly into matter in a single step.

The second result shows that the path of light traveling through a magnetic field in a vacuum bends differently depending on how that light is polarized. Such polarization-dependent deflection (known as birefringence) occurs when light travels through certain materials. (This effect is similar to the way wavelength-dependent deflection splits white light into rainbows.) But this is the first demonstration of polarization-dependent light-bending in a vacuum.

Both results depend on the ability of RHIC’s STAR detector—the Solenoid Tracker at RHIC—to measure the angular distribution of particles produced in glancing collisions of gold ions moving at nearly the speed of light.

Such capabilities didn’t exist when physicists Gregory Breit and John A. Wheeler first described the hypothetical possibility of colliding light particles to create pairs of electrons and their antimatter counterparts, known as positrons, in 1934.

“In their paper, Breit and Wheeler already realized this is almost impossible to do,” said Brookhaven Lab physicist Zhangbu Xu, a member of RHIC’s STAR Collaboration. “Lasers didn’t even exist yet! But Breit and Wheeler proposed an alternative: accelerating heavy ions. And their alternative is exactly what we are doing at RHIC.”

An ion is essentially a naked atom, stripped of its electrons. A gold ion, with 79 protons, carries a powerful positive charge. Accelerating such a charged heavy ion to very high speeds generates a powerful magnetic field that spirals around the speeding particle as it travels—like current flowing through a wire.

“If the speed is high enough, the strength of the circular magnetic field can be equal to the strength of the perpendicular electric field,” Xu said. And that arrangement of perpendicular electric and magnetic fields of equal strength is exactly what a photon is—a quantized “particle” of light. “So, when the ions are moving close to the speed of light, there are a bunch of photons surrounding the gold nucleus, traveling with it like a cloud.”