Technologies based on manipulation of individual quantum states are expected to soon become commonplace—the “second quantum revolution” is on everyone’s lips these days. At the heart of many envisioned device architectures are quantum systems generating exactly one photon per excitation event—so-called single-photon emitters.

A vast amount of experimental effort is thus concerned with identifying, characterizing, and manipulating such quantum emitters by optical means—that is, in practice, by employing suitable laser light sources. Yet, the demands are quite challenging. Recently developed continuous-wave optical parametric oscillators (OPOs), now also providing nearly gap-free coverage of the visible and the near-infrared spectral range, are expected to take quantum nanophotonics a decent leap forward.

Light sources based on OPO technology offer a remarkable versatility of operational wavelengths compared to conventional lasers. Essentially, this is because the OPO principle relies on a process referred to as parametric conversion in a nonlinear optical material—rather than on stimulated emission in a suitable laser gain medium.

The OPO process can be perceived as splitting of an incoming pump photon of high energy into two photons of lower energy, the latter usually referred to as signal and idler photons, respectively (see Fig. 1). It is subject to the conservation principles of photon energy and photon momentum (phase-matching condition), but otherwise—at least in theory—not limited by fundamental restrictions. In other words, as long as the two conditions are met, the operational wavelength of the signal (and respectively the idler) can be freely chosen.

In view of their flexibility, OPOs appear as the technology of choice not only for applications demanding laser light at “unconventional” wavelengths, but in particular when tunable laser light output is required. However, while the OPO concept was experimentally demonstrated already more than half a century ago,1 commercially available devices have been slow to come. This is especially true for systems operating in continuous-wave mode (CW OPOs), so that generation of widely tunable CW laser light mostly had to rely on conventional lasers until quite recently.

Exciting advances in CW OPO technology have been driven, on the one hand, by the emergence and increasingly sophisticated design of new nonlinear crystals, like periodically poled lithium niobate (PPLN). On the other hand, the increasing availability of suitable high-performance pump lasers, such as diode-pumped solid-state (DPSS) lasers and fiber lasers, has spurred the practical realization of widely tunable CW OPO devices with unprecedented characteristics.

By the nature of the OPO process, any generated output wavelengths will be longer than those used for pumping. Consequently, OPO devices operating across the visible spectral range do either require UV pump sources or, alternatively, need to employ additional frequency conversion stages (to convert signal and idler wavelengths in the visible range). As of today, only the latter approach has been proven to be technically practicable for commercializing operationally stable turnkey systems.2

Figure 2 illustrates two examples of such a two-stage design concept, adapted to a 532 nm DPSS laser and a 780 nm fiber laser pump source, respectively. The operational principle relies on a cascaded sequence of nonlinear optical processes within two cavities (OPO and second-harmonic generation cavities). The OPO cavity scheme employed is commonly referred to as singly resonant OPO cavity design; that is, the cavity is operated on resonance at either a particular signal wavelength or a particular idler wavelength. 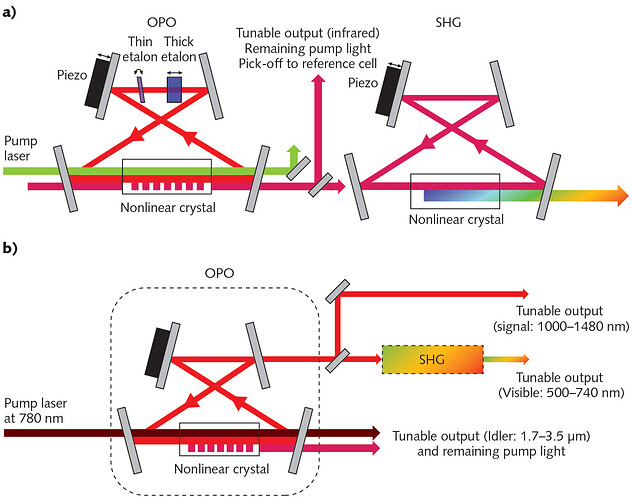 That is actually impressive. Thanks for sharing