I prefer DPSS lasers, but if you do want to consider one of the higher power green laser diodes, here’s what I’ve learned about the NUGM04T: 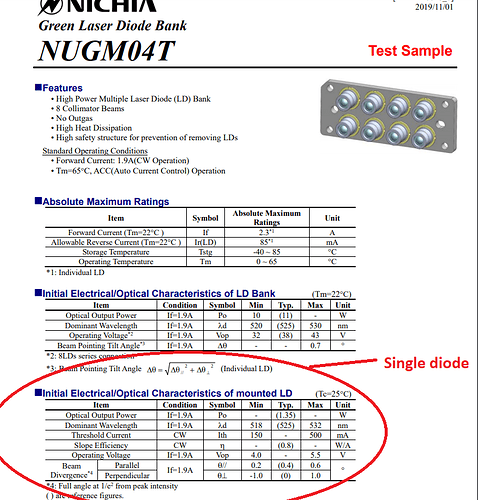 Edit update: Here’s a link to the only store I know of right now selling the FAC corrected NUGM04T, just now finding the listing from opticsld:

NICHIA φ9mm Green 525nm 520nm 1.6W Laser Diode, Square Spot with FAC Lens | eBay - I asked this seller if the FAC fiber is AR coated and they responded there is no coating. The price for these FAC diodes had been listed from $150-175 USD each in the past by others, but the ebay seller opticsld has them at a much better price right now.

Another Chinese seller on ebay with the store name of sabzh21 LASER TREE | eBay Stores has been offering FAC corrected 1.5 watt 525 nm laser diodes but this diode is actually a modified diode taken from an eight diode NUGM04T bank/module, each diode specified to produce 1.35 watt output (the listing never indicated which diode) which has had the ball lens removed, a FAC inserted and then capped. If you contact Sabrina who runs that store, I believe she will still sell them through ebay, but I haven’t seen her list the green “1.5 watt” fast axis corrected diodes for several months now, maybe closer to a year.

She had two versions of this diode offered in the past, one producing a line, the other a squared shape output. Their listing had stated after putting the FAC into the diode an inert gas was placed inside the capped diode, but I am so skeptical regarding whether inert gas is really in it (or whether inert gas is needed for green for that matter too). She wrote me back when asking questions about whether the modified diode had been long term tested, she responded many hours were put on one of these FAC corrected diodes to assure they will last and also that the FAC didn’t move at all, held in place well with the glue she uses. Because every question I asked about the diode and collimation was properly understood and answered well in english, I tend to believe she is giving me the strait story and telling the truth.

The above photo’s 1 & 2 show what the spot from a fast axis collimator or FAC corrected diode looks like, on the left is the spot produced from the FAC corrected output of the diode which is fairly square shaped, this is the output of the diode through the FAC lens which partially collimates the fast axis alone to reduce how fast the output from that axis spreads, on the right side is a photo of the output through an additional lens which is a 15 mm diameter 75 mm FL PCX which fully collimates both the fast and slow axis outputs from the diode to infinity focus (with this optical arrangement both axis outputs from the diode won’t be perfectly focused to infinity, one can be, the other close enough for pointer use). Although the spot produced by the FAC lens alone appears square, after full collimation the spot will still be rectangular as the FAC does not perfectly square the beam output, but without it the beam would be a far broader appearing rectangle.

How a FAC lens works and what is going on with the emitter of a laser diode fast and slow axis’ is a often misunderstood subject. The fast axis is actually coming from the thin axis, the slow from the broad axis or broad side of the emitter stripe and they each have their own polarities 90 degrees from one another. See diagram, below. 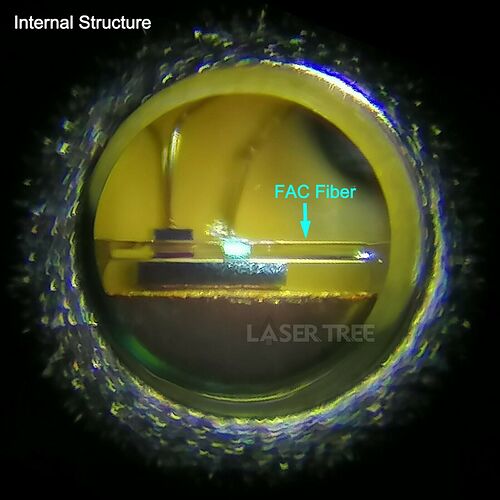 Last year, when finding FAC corrected NUGM04 diodes for sale on the Laser Tree AliExpress web page I asked them if they were modifying the diodes themselves to insert the FAC, they responded the factory does that, that they don’t modify them. After that answer, who knows what the reality is, my expectation was they were probably buying the modified diodes from Sabrina which still may have been the case but for some reason wouldn’t say so. Also, it is interesting to note Sabrina’s ebay store uses the same store name as the AliExpress Laser Tree store. However, when I asked each of them if they are associated, both denied the association. There must be some business reason for the denial and they are likely the same company is my guess.

Here’s a link to the AliExpress Laser Tree store listing 1 watt FAC corrected 520 nm laser diodes for $126 each. This same store had offered the “1.5 watt” FAC corrected NUGM04T in the past, not sure which diode this is: 525nm/520nm 1W, high power green laser diode, with FAC, compressed spot technology, square beam spot|Woodworking Machinery Parts| - AliExpress

Here’s a link to Techhood on ebay who is in CCP overrun Hong Kong selling the NUGM04T diode which has a cap instead of a ball lens, no FAC in this one: NICHIA NUGM04T 525nm 1.4W+ Green Laser Diode w/ gas-filled Modified Cap | eBay - Techhood is calling this diode a 1.4 watt diode which with the ball removed is probably a true output at 1.9 amps of current. If choosing between this diode and the 1 watt rated NDG7475T, keep in mind the NUGM04 has about 1/3 higher divergence. Seems to me, to get the extra 350 mw of output power Nichia just widened the emitter stripe 30% more. 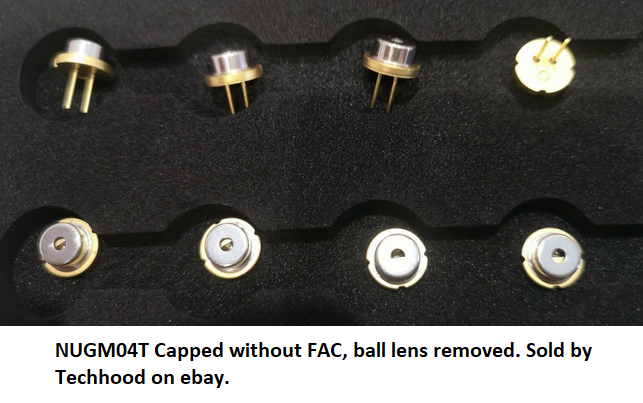 Here’s a link to some 75 dollar NUGM04T diodes with the original ball lens intact which were probably extracted from an array (without a FAC): NICHIA NUGM04T TO5-9mm Green 525nm 520nm 1.6W Laser Diode High Power | eBay

When I asked Sabrina with the ebay Laser Tree store what her primary customer base was for her FAC corrected diodes, I was told the capped FAC version of this diode is made for projector use. I assume so the beam isn’t so wide on one side and thin on the other axis but the beam shape is still a rectangle and could use more correction using a cylinder pair to square it more, but you will still end up with a relatively fat beam compared to what some DPSS lasers produce.

The FAC she or someone added is a piece of round fiber acting as a FAC, not a higher quality AR coated PCX or other shaped FAC lens, but this is not uncommon for the less expensive FAC diodes, usually they are used on C-Mount laser diodes as installation placement is much easier on them without having to remove a cap. Perhaps she is now using an AR coated FAC, but the diodes I bought just used a section of round fiber without AR. Because of this an amount of power is being lost at the FAC, so even though these diodes can be pushed much harder than the rated 1.35 watt output at 1.9 amps, don’t expect more than 1.5 watts at 2300 milliamps of current which is the absolute maximum rated current. That said, some of the FAC corrected diodes I received from Sabrina produced 1.6 watts at 2300 mA.

Note: The NUGM04T diodes without a FAC have about 30% higher divergence than the NDG7475T 1 watt diode which can usually be pushed to 1.3 watts output at reduced expected life. Because of this the 1 watt rated NDG diode might be a better choice for some applications.

Whether pushing the 1 watt rated NDG7475T to 1.3 watts or the FAC inserted NUGM04T to 1.5 watts we might be running both diodes too far beyond design (The NDG7475 certainly would be) to reach even half way to their normal expected life and if so, perhaps after some number of thousands of hours use both diodes will either loose more than half their power output, or fail well before the normal 10,000 hour expected life.

Note: Isn’t the 10,000 hour rating in reference to loosing 50% of the initial full power output capability of a new diode at maximum rated current? Or perhaps that and expected failure if run beyond 10K hours at rated current? I don’t know the loss of the ball lens the NUGM04T has, if the loss is 150 milliwatts then this diode might actually be within spec at 1.5 watts output, provided the FAC is low loss which I believe when properly designed with an AR coat they normally are.

I like the FAC corrected NUGM04T in a pointer but only if using a lens with a long enough focal length to allow the beam to expand to 10 mm diameter or wider before full collimation, otherwise I consider the divergence too high from both the NDG7475T or the NUGM04T diode for pointer use where you want to shine the beam out hundreds of feet or more. For use in projectors, I guess it depends upon how far away the screen or wall you will be projecting on will be before the divergence becomes a factor to consider.

I put one of the FAC corrected NUGM04T diodes I purchased from Sabrina in a pointer, video here: 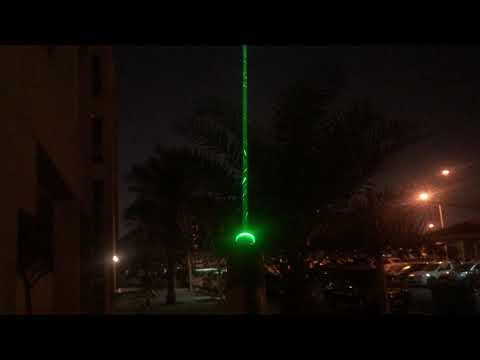 The beam of this pointer is wider than most because I used a 15 mm diameter PCX lens with a relatively long focal length to collimate the beam. Towards the end of the video I rotated the pointer to show the thin side of the beam.

This is good info. Thanks

I will probably be adding more photo’s and editing some of the text in the future, I just edited the text about the fast axis collimator and inserted a link for more information about the technique.