Optical innovation could calm the jitters of high-power lasers 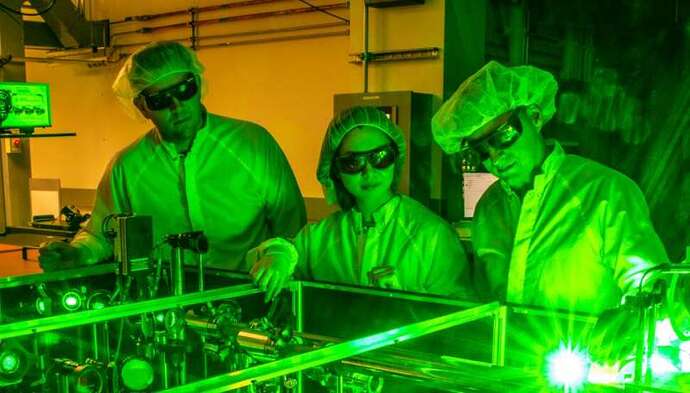 The Berkeley Lab Laser Accelerator (BELLA) Center at the Department of Energy’s Lawrence Berkeley National Laboratory (Berkeley Lab) has developed and tested an innovative optical system to precisely measure and control the position and pointing angle of high-power laser beams with unprecedented accuracy—without interrupting or disturbing the beams. The new system will help users throughout the sciences get the most out of high-power lasers.

The experimental validation effort was led by doctoral candidate Fumika Isono of Berkeley Lab and UC Berkeley. Her findings are described in a paper published recently by the Cambridge University Press journal, High Power Laser Science and Engineering.

“This is a tremendous advancement in measurement and control that will benefit high-power laser facilities worldwide,” said Cameron Geddes, Director of Berkeley Lab’s Accelerator Technology and Applied Physics (ATAP) Division, of which the BELLA Center is a part.

People think of a laser as being so precise that it passes into the language as metaphor, but users with demanding applications know that laser beams move around at a tiny scale in response to the vibrations and variability of even the most controlled lab environment.

“Missing the target by as little as a few microns can make the difference between amazing science and an unwanted addition to background noise,” said Isono.

Pointing angle offsets of less than a thousandth of a degree can result in unwanted complexities as well. That’s where diagnostic sensors and feedback systems come into play.

Measuring these parameters both accurately and without intercepting the beam is the trick. Traditional methods either greatly sap the power of the beam by intercepting its pulses (which at any rate is difficult for intense, high-powered beams) or suffer inaccuracies because they are not measuring the beam exactly as delivered. The BELLA Center’s innovative approach involves splitting off and monitoring a low-powered exact copy of the main beam, reflected from the rear surface of a specially designed final optic in the beam line.

The heart of this new approach is a laser architecture with three key attributes. First, it simultaneously provides five high-power pulses and a thousand low-power pulses per second, all following the same path. Second, the beamline design is optimized to keep the high-power and low-power pulses matched in size and divergence. Finally, it replaces one of the reflective beam line mirrors with an innovative wedge-shaped reflector that has specialty coatings on both the front and the rear surfaces.