I was writing to someone about color and our perception of it on a YT channel and decided to cut and paste some of it here. I’m interested in what might be possible for the human race someday, if we can genetically improve our color perception, if I dare think we could improve upon natural evolution, which I am not sure would be something we can do, giving the spectra our sun emits we are probably perfectly suited to it with what we have, at least, for what we need. 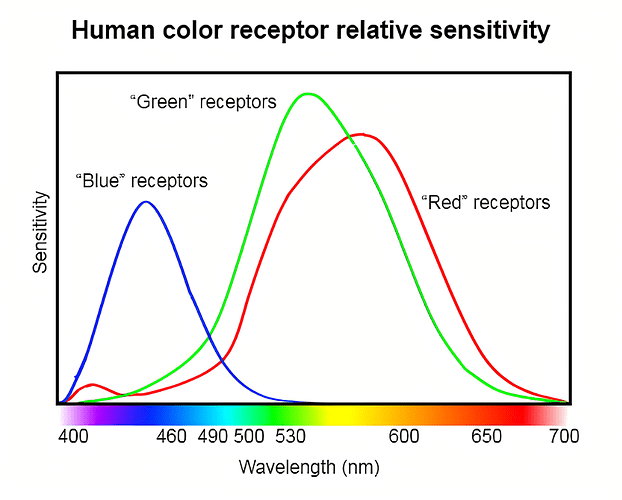 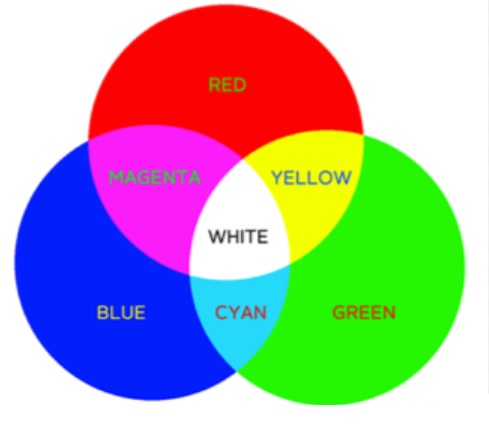 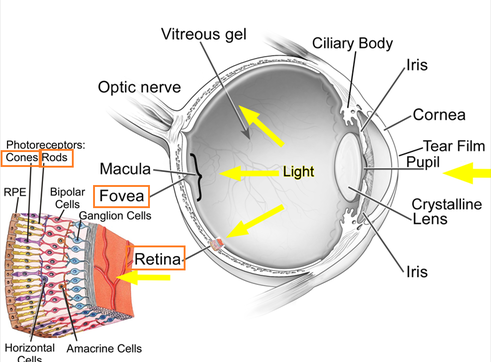 Here are some of the rambling thoughts I have on the subject today:

What I want to call a true color is merely a single wavelength, not a broad mix of some combination of red, green or blue hues, or other combinations of wavelengths of light. When I think about what is going on with our perception of color it seems the brain is just as responsible for what we experience in color than the color cones of the eye are too.

In my view, the reality is there is no color, only our reaction to wavelengths in how they appear to us. One shade of red is 650 nanometers, a shade of green 550, of blue 450. We can see light wavelengths, but our eyes can only detect three well, the red, green and blue ones. That said, we can visually infer the existence of other wavelengths in how they affect the three color cones of the eye and our brain represents them as if we had color cones to detect those too.

If we could actually see all of the individual wavelengths in the span of the visible spectrum as distinct colors, we would need to have a color cone in the eye for each one (i.e., each 5, 2, 1, quarter nm, half nm or whatever) but additional color cones at such narrow resolutions would need to have far sharper sensitivities to those specific wavelengths to be of any use to distinguish them, so I doubt that is something which nature would try to come up with, but I can see the possibility of having one or two more color cones which are sensitive to other portions of the visible light spectrum such as *yellow or cyan which are in between red-green and green-blue where we don’t have color cones in our eyes specifically sensitive to those regions of the light spectrum in wavelength.

To have color cones for two additional regions like that would give a total of five color cones instead of the three we have which have fairly broad responses to the red, green and blue wavelengths. I’m not saying we cannot see yellow and cyan wavelengths, our R, G and B color cones can also detect those too but at substantially lower sensitivity to them and not specifically for those wavelengths alone, just as part of the in-between wavelengths our eyes can detect without having cones specifically evolved to detect peak intensities at those two wavelengths, we detect peak amounts of light in the red, green and blue portions of the visible spectrum.

Having a cone for each individual nanometer of light wavelength would not be very efficient, so nature made a way to see far more colors than we really have the color cones for. That is natures way to broadly detect and process wavelengths we cannot individually detect as a continuous spectra to give an analog illusion of seeing the full continuous spectrum which we really can’t, at least we can’t with anything near a flat spectral response to all of the wavelengths which really exist in the spectra of light between roughly 400 and 700 nanometers.

I wonder what we would see of colors if we did have five color cones to include yellow and cyan, how much that would increase the beauty of color we see in the world, I imagine the difference would be huge, even with having color cones for just two more sections of the visible light spectrum. A bird has four cones to include UV, butterflies have a full fifteen different types of photoreceptors, a mantis shrimp has up to sixteen different types of color based photoreceptors, now that’s a different view.

It’s easy to be envious of all the sights other animals can see. But it’s important to also keep in mind that the typical 10 million colors a human can see is also quite impressive.

Note: While researching this subject I found information there is a rare mutation called tetrachromacy which produces a fourth color cone in the yellow region of the spectrum, right where I was postulating it might be useful to have another one (as well as cyan).*

How many colors are there? 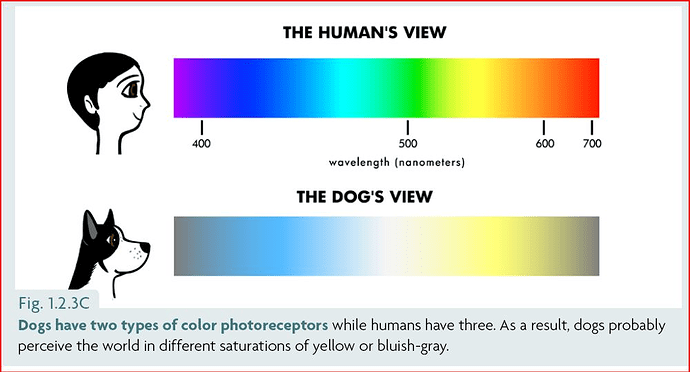 …trying to count all of the colors in the world is really more metaphysical than it is scientific. Most researchers are pretty satisfied with quantifying the full color list at 10 million because this takes into account the maximum number of configurations based on the human eye’s ability to perceive 1,000 shades of light, 100 levels of red-green shades and 100 levels of yellow-blue shades.

However, we can’t escape the fact that the concept of labeling all colors is slightly arbitrary due to the subjective nature of color perception. At the end of the day, artists and philosophers are certainly free to say that the number of colors in the universe is infinite.

Edit: Found this video, he pretty much says the same basic stuff. I guess this is so common knowledge, but the subject still intrigues me, especially the idea of having more color cone receptors than the three we have, I wonder, would that be something worthwhile or pleasing or detracting from what is important?

I still don’t quite understand how we can interpret a color like yellow when we don’t have a color cone tuned to respond to that wavelength, there is a gap there, yet we experience it. If anyone knows how that mechanism works, I’m looking for more understanding on this subject. I can understand how a having a gap between green and red causes that perception when there is energy there at that wavelength, but how does it work and how does what we perceive as yellow happen? 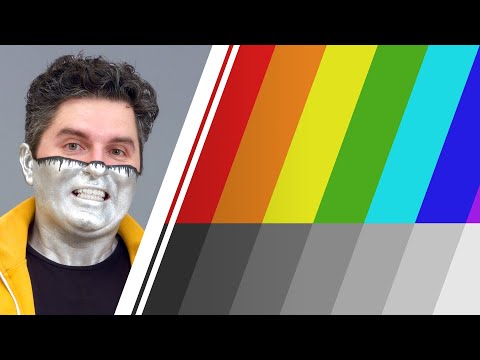 Have a look at the diagram you posted for the cone sensitivity: 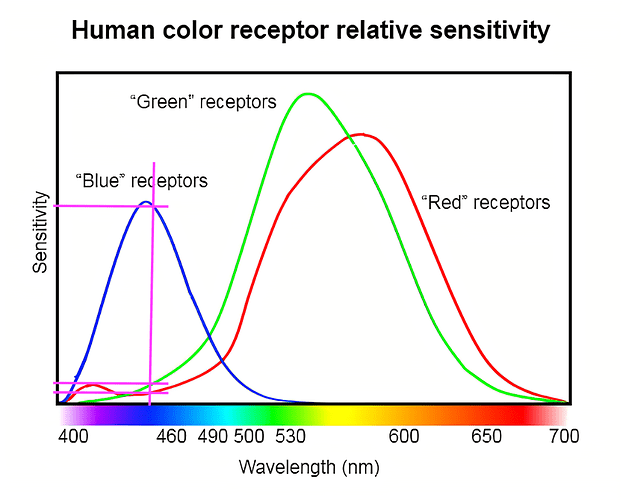 444995×799 214 KB
Our brain will receive signals from every receptor type. However it will receive a different intensity from each receptor.
Say 3% red excitation, 7% green excitation and 95% blue excitation.
Having the actual light intensity change, will only change the absolute values but not the relative values between the received receptor signals.
So lower intensity 444nm light would result in for example: 1,5% red, 3,5% green and 47,5% blue. 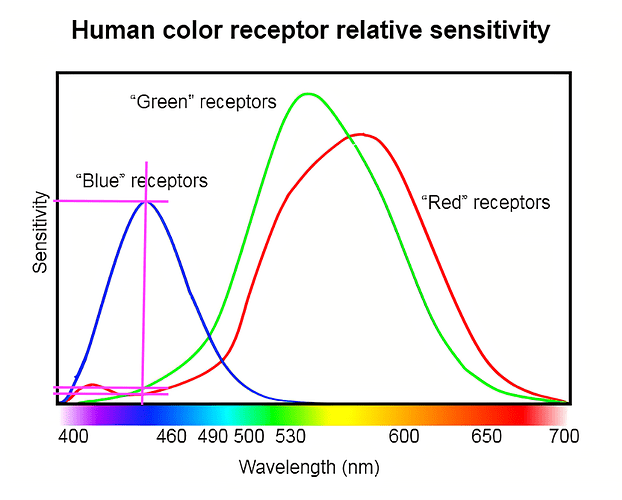 Our brain now receives almost the same amount of signal from the red receptors, but a higher blue and green signal. This change in relationship between the receptor signals gets interpreted as “deep blue” instead of “blue”. 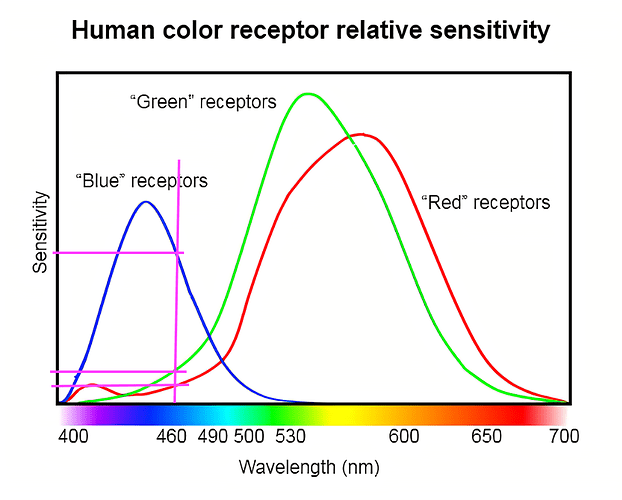 435995×799 214 KB
We now receive a much lower blue excitation signal, but increased red and green amounts. With green actually increasing more than red.

Our brain just reads the relationship of all receptor to interpret color. The absolut intensity gets interpreted by how much all receptors are stimulated.

Same for the yellow part of the spectrum. The proportions between the red and green receptor excitation changes with different wavelengths. There is a part where the actual relationship does not change much: 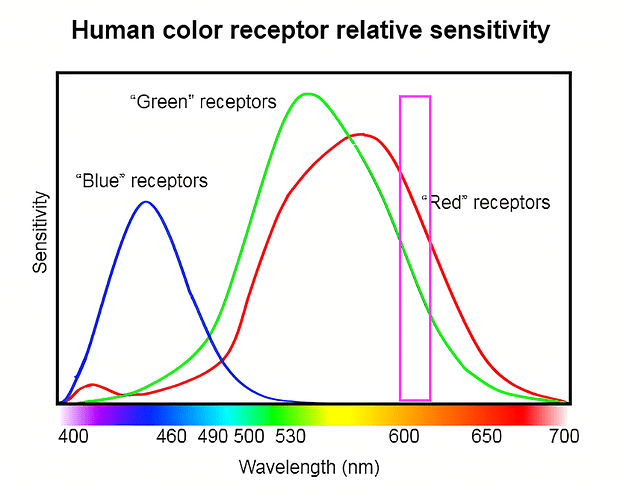 I fond that this is around 610 to 625nm or something like this. In this range, the perceived color does not change much (for me at least) which is explained by: The proportional excitation between the red and green receptor stays quite constant in this range. Just the overall intensity changes. Our brain can therefore not really decide if its a color or brightness change.

Thats why RGB TVs and RGB lights work. We can choose the amount of excitation of the three receptors with just 3 wavelengths to match our wanted signal (red + green = yellow).

In 1965 came experimental confirmation of a long expected result - there are three types of color-sensitive cones in the retina of the human eye, corresponding roughly to red, green, and blue sensitive detectors. 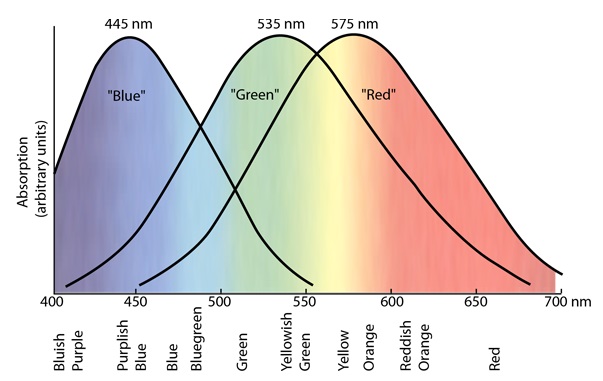 Painstaking experiments have yielded response curves for three different kind of cones in the retina of the human eye. The “green” and “red” cones are mostly packed into the fovea centralis. By population, about 64% of the cones are red-sensitive, about 32% green sensitive, and about 2% are blue sensitive. The “blue” cones have the highest sensitivity and are mostly found outside the fovea. The shapes of the curves are obtained by measurement of the absorption by the cones, but the relative heights for the three types are set equal for lack of detailed data. There are fewer blue cones, but the blue sensitivity is comparable to the others, so there must be some boosting mechanism. In the final visual perception, the three types seem to be comparable, but the detailed process of achieving this is not known.

When light strikes a cone, it interacts with a visual pigment which consists of a protein called opsin and a small molecule called a chromophore which in humans is a derivative of vitamin A. Three different kinds of opsins respond to short, medium and long wavelengths of light and lead to the three response curves shown above. For a person to see an object in color, at least two kinds of cones must be triggered, and the perceived color is based on the relative level of excitation of the different cones.

A fourth pigment, rhodopsin, is employed in rod vision.