I’ve been looking into the use of Li-ion batteries in parallel, concerned this might be a bad idea. As it turns out, if the batteries are individually charged this could be a problem if a discharged battery is accidentally mixed with a charged one, even if only a few tenths of a volt difference. Due to the low resistance of these cells once placed in parallel the higher of the two can dump a lot of current into the lower voltage cell damaging it, causing too much heat, a fire or explosion if the voltage difference is too much (especially when using unprotected cells).

So, not a good idea. However, if the cells are welded together in parallel and are of the same model of battery from the same battery run so they are as identical as possible then there is no problem because both cells will charge together to the same voltage. However you will need a dedicated charger made just for that configuration.

I’ve looked into whether using unprotected cells in series is reasonable and found there can be problem there too, but due to being able to over charge them as well as over deplete or discharge them which can cause the battery to ignite too. So unless you make sure they cannot be discharged too far that could be a problem. If protected, this circuit protects the battery against common dangers, such as overcharge, over discharge, short circuit/over current, and temperature.

The only reason I would choose to use an uprotected cell is due they are far easier to find in stock from various suppliers at higher current ratings. Button top protected cells with maximum continuous current ratings of 10 amps or higher are few and far between to find at a decent price anywhere right now, usually out of stock.

The reason I was researching this is because I have been planning on building a multi-diode laser pointer and need as high a mAH rating battery supply I can reasonably make out of batteries. Looking into this I’ve come to the decision, for my application, using three or four strings of 21700 batteries is the way to go. Why? Because a single battery can have as high as 5000 mAH capacity and if running several strings of them (not paralleled) in a single tube you can have, for example, 3 x 5000 mAH capacity, or 15000 mAh total. Because of using separate drivers for each diode I am not forced to run them all off of the same string of batteries in series, thus can choose to just put a portion of the individual drivers needed to draw from each string, for example two drivers per battery string, 3 or more, etc. This makes individually charging each battery safe because if you put a low cell in the string on accident the total voltage for that string would just be lower, but no other problem I am aware of. Seems this solution is the best because you can have high mAH capacity along with isolated cells so there isn’t a potential problem mixing uncharged cells with charged.

A better battery for high demand applications? The use of the 21700 batteries allows a large amount of current, one of the Nitecore 21700 batteries, part number NL2150HPR (protected), can supply 15 amps of constant current each, try to find an 18650 battery which can do that and there are very few which can, even if they claim to be able to do so, usually the time is very limited and not a true constant current rating as they claim. Also, the high current 18650 batteries almost always have a lower mAH capacity, 3000 at most per battery while the 21700 can have 5000 mAH. A single 21700 can have over 40 percent higher capacity than a single 18650 which is fairly close to the mAH capacity of two 18650 batteries in parallel. So, for myself, the question is solved, whenever possible, for high capacity and high current requirements design to use the 21700. 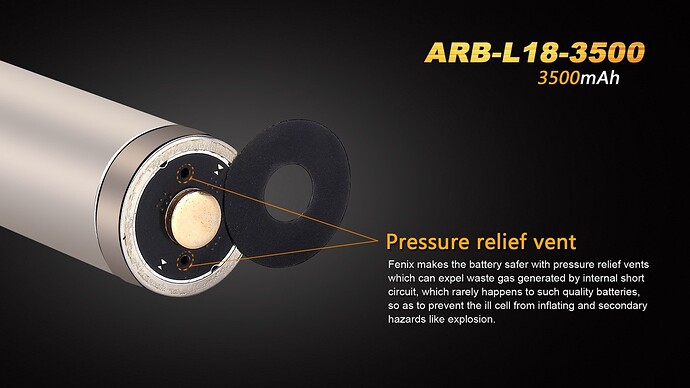 What is the Difference Between "Protected" and "Unprotected" 18650 Batteries

When searching for 18650 batteries or any lithium-ion battery, it's important to know whether it's a protected battery or an unprotected battery. Read more to learn the difference. 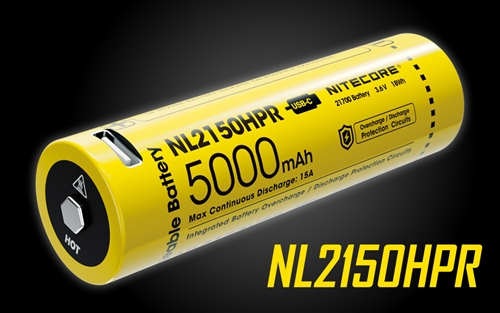 I am looking for a round form factor multi-cell 21700 Li-ion battery holder which will allow me to insert or remove individual batteries. I’ve posted this same request on another forum hoping for a response, but so far, none which can help me find a holder. I did find these plastic holders, but not a complete battery holder already wired: 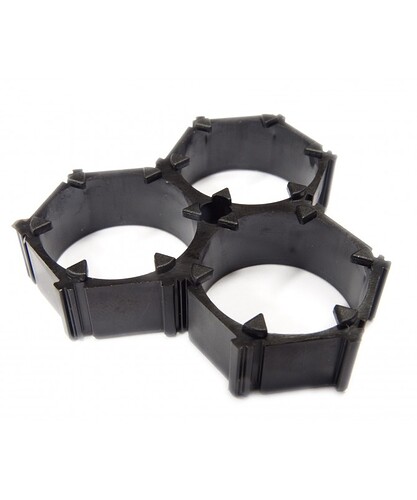 Cell holders x3 (honeycomb shape) - can be combined in a variety of shapes to align to available space. Fits li-ion 21700 batteries. The cells are placed on a multiple triangle shape – allows to utilize available space more efficiently. Manufacturer:... 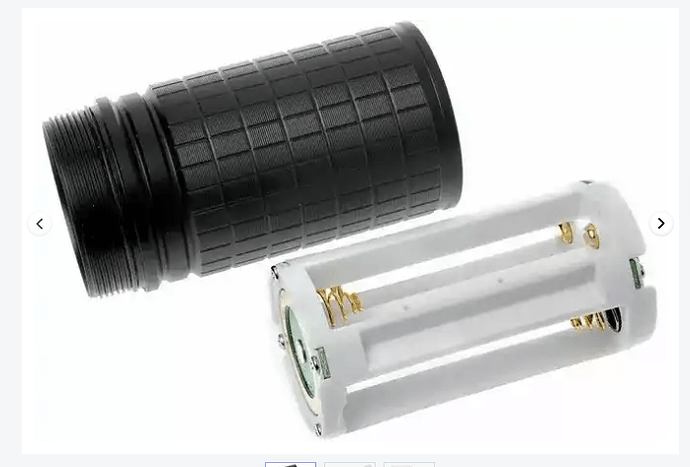 The above battery holder is for a Fenix TK75 flashlight which has four 18650 batteries wired in series-parallel to produce 8.4 VDC from a fully charged set of four batteries. I’d like a holder like this but instead of series-parallel, just series output with isolated batteries, not in parallel.

These have both ends with a center positive terminal and outer negative ring allowing them to be stacked to increase the mAH capacity of a string of holders, up to three: Fenix body extender and battery holder for TK75 | Advantageously shopping at Knivesandtools.co.uk

Maybe I should just use these 18650 holders instead of the 21700 version I’d like to find, but these battery holders appear to be out of stock everywhere, Fenix stopped offering them, I believe due to problems when users paralleled a charged and discharged battery together, POOF. That’s why I don’t want to use them unless rewired for individual series outputs from each battery, but for this holder, with a single positive terminal on top, I can’t use it that way without removing all of the wiring and putting new end caps on it with separate terminals. Might as well make my own than to modify these that much and if going to that much trouble, use 21700 batteries for 40% more capacity.

This five cell holder for 21700 batteries looks interesting, but has a larger diameter than I wanted, won’t fit in my Fenix TK75 flashlight battery tube with a 45 mm ID: 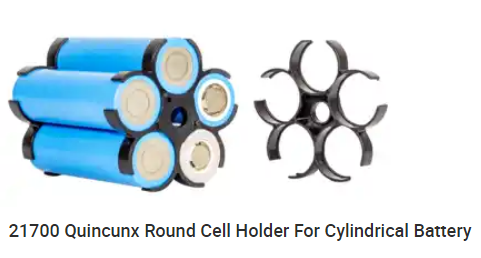 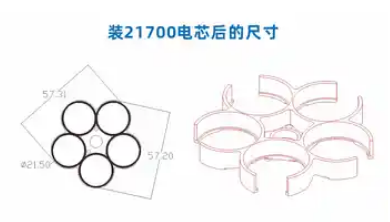 This battery pack looks promising but I have not been able to find specifications for the batteries inside or the configuration to know what the constant current rating might be: 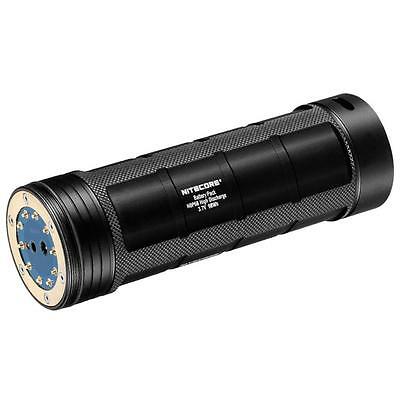 Find many great new & used options and get the best deals for Nitecore NBP68HD Advanced Li-ion Rechargeable Battery Pack for TM28 TM15 TM26 at the best online prices at eBay! Free shipping for many products!

I bought a GT94X flashlight to use for my multi-diode host because it uses 21700 batteries inside a nice battery carrier but was surprised each pack does not use the series-parallel arrangement, the extended tube can take two carriers to double the capacity by having the second one electrically paralleled with the first carrier, but each carrier has all four cells in series to produce over 16 volts from a fully charged pack. This voltage is a bit high for the 12 volt max input laser diode drivers I want to use; the BB8M, but I might be able to power two of these driver inputs in series with one another so each driver gets half the voltage and would then be perfect, if I can run the drivers that way.

I think you worry to much.

Even if you drop in a freshly charged 18650 with low internal resistance like an LG MJ1 with a completely depleted one.
The equalization current will not be very high for very long.
Most cells can handle 1C charge current fine e.g. 1x the mAh rating.
So a 3,5Ah cell like the LG can handle 3,5A charge current fine without damage / degradation.

The fully charged cell will drop to 3,9V under 3,5A load. This load is also very fine for the cell, max is 10A
The discharged cell will quickly rise to around 3,6V with 3,5A charging current.
This would only give a voltage difference of 3,9V-3,6V = 0,3V.
To even let 3,5A current flow, the resistance between the cells needs to be lower than 85mR (0,3V / 3,5A).
Cell resistance is stated inside the Datasheet as <40mR per cell. So both cells already resist the current with lets say 50mR.
This leaves only 35mR resistance for the contact points and the wiring inside the battery holder that connects both batterys.

So in reality you might not even see 3,5A max current and if you got a very sturdy low resistance battery holder (unlike your picture), you might see 4A for a very short time.

Even less to worry about:
LG states in there Datasheet safety section:

So even a direct short would not result in a catastrophic failure of a well made cell.

don’t worry about using cells in parallel even if you mix something up and drop in a freshly charged one to a completely dead one: nothing will happen, other than a very quick charge of the empty cell.

I personally only use non protected cells from renowned manufacturers. No keep power / ultra fire / trust fire / Chinese stuff. Only LG/Sony/Samsung/Sanyo and so on.

Using protected cells also features the disadvantage of having way more internal resistance so less usable energy and more heat close to the cell.
Protected cells have at least two mosfets that can disconnect the real cell from its contacts, these add resistance. 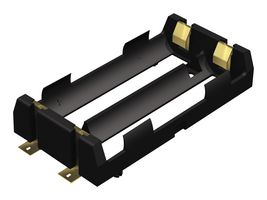 Drawing 5A on these results in around 0,15V drop per contact. So two cells in series already drop 0,6V resulting in 120mR added resistance and lost energy of around 4Wh out of 25Wh for two of the MJ1 LG cells. Thats 16% runtime lost to battery contacts
Adding protection for both cells and still drawing 5A would result in around additional 4% of loss inside the protection circuit resulting in 20% loss over all. Quite an runtime impact!
Just think about how high the impact might be if you use wimpy spring terminals to connect the cells…
35% loss would be a low estimate.

Well that’s some good news, I do worry about batteries being unequal. I can’t use protected cells in my projects because, so far, I cannot find them capable of enough current.

Thats because the Mosfet (electronic switch) thats used to disconnect the cell from its contacts (to prevent overcharge/undercharge) represents a resistance which in turn causes heat and voltage drop if current is flowing.
More current equals more heat and more voltage drop. Therefore manufacturers rate there protected cells with lower current to keep heat build up at bay.