Laser induced white emission (LIWE) in rare earth doped oxides excited by focused laser beam in vacuum was reported by Wang and Tanner1. Since then, LIWE was observed in different materials placed in vacuum ambient2,3,4,5,6,7,8. An increase in the ambient pressure was accompanied by a decrease of LIWE intensity, which remained stable up to critical point9,10. The excitation power dependence of LIWE intensity demonstrated a threshold behavior for multiphoton avalanche processes1. Numerous models have been proposed for white light generation in lanthanide-based systems including the intervalence charge transfer (IVCT)9,11, multiphoton absorption12, thermal avalanche13 and others2,14.

Recently we have reported LIWE in transparent Cr:YAG ceramics15,16. In a course of studies we have found that an occurrence of white emission was closely related to the interaction of focused laser beam with the surface of ceramics. In the present study we study the LIWE process in Cr:YAG transparent ceramics under CW IR laser excitation. It was shown that LIWE is the surface related phenomenon and the light is emitted only out of the interaction spot of laser beam and does not penetrate the ceramics.

Scheme of the LIWE measurement setup is shown in the Fig. 1. The samples were placed in a vacuum cell connected to EXT75DX turbo molecular vacuum pump with TIC controller (Edwards) to achieve the pressure of 10–4 mbar. To collect the emission spectra, the AVS-USB2000 Avantes Spectrometer was used. Emission spectra were measured using an infrared continuous wave Nd:YAG laser 3,4 W as an excitation source. The spectra were not corrected to the detector sensitivity. In order to protect the CCD camera, FGS900S filter was used for measurement of the power dependence of LIWE intensity. LIWE was measured under P -10–4 Pa. The effect of pressure on the LIWE intensity of Cr:YAG ceramics was studied in our previous work15. 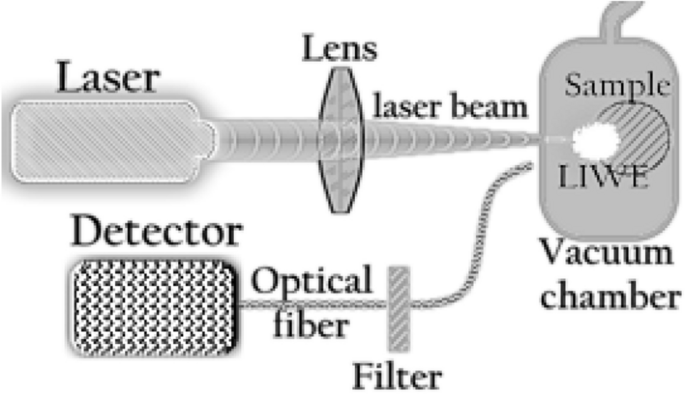