I confirmed them to be transmissive and to produce a very bright white appearing output. Great they used Sapphire for the wafer as it will conduct heat well when mounted to a heat sink. Maximum pump power from the laser is 7 watts per square mm.

These plates are very small, three sizes listed at the below link: 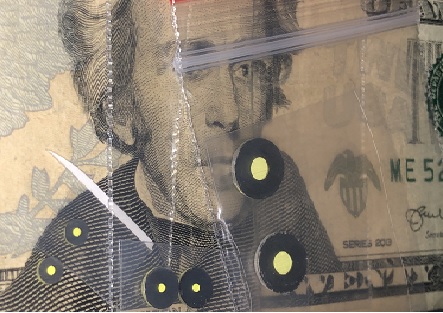 From smallest to largest: 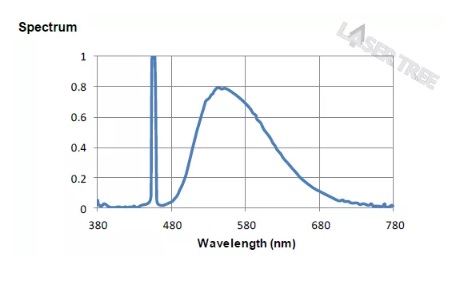 I’m thinking this is small enough, I can just put it inside the lens adjustment ring on a 12 mm DTR module and shoot the blue laser beam through one that way, and then put a large collimation lens in front of that to focus the white beam output, will give that a try.

Edit: I need to find a way to heat sink the wafer, so that won’t work, but I can use parts of modules to do so.

They look really cool. I’ll be looking forward to seeing a test using a NUBM44.

When I ordered them I didn’t understand, I thought the 3 mm, 5 mm and 8 mm diameters called out on their web page was the size of the phosphor spots, nope, the diameter of the whole thing. I would not have ordered the 3 mm wafer if I knew it was that small of a diameter.

Considering most 445/450’s have a spot size of around 5x2mm it is a tad small. However a 1W diode could be focused slightly onto the surface without exceeding the damage threshold. And then you could have a small LEP with a slightly higher divergence.

I received two kinds of phosphor LED powder in the mail today, also received some surplus sapphire window disks in the mail too. I want to experiment with some of this powder sandwiched between two of the 25 mm disks pumped with blue. 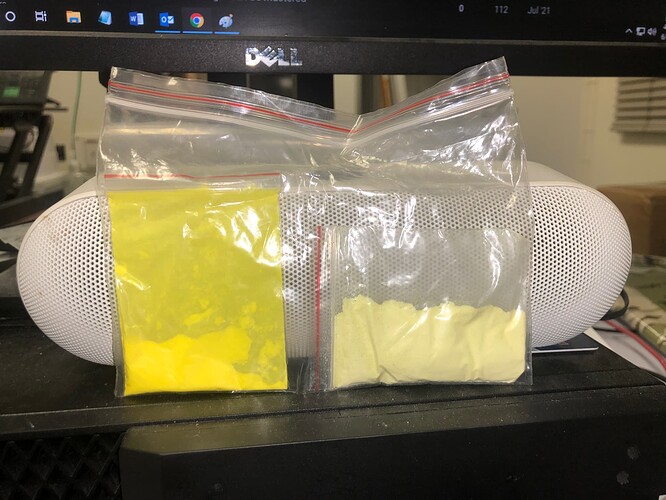 The phosphor on the left is much finer grained material than the bag on the right, 500 nanometer and 10 micron particle sizes. The finer stuff coated the bag yellow. 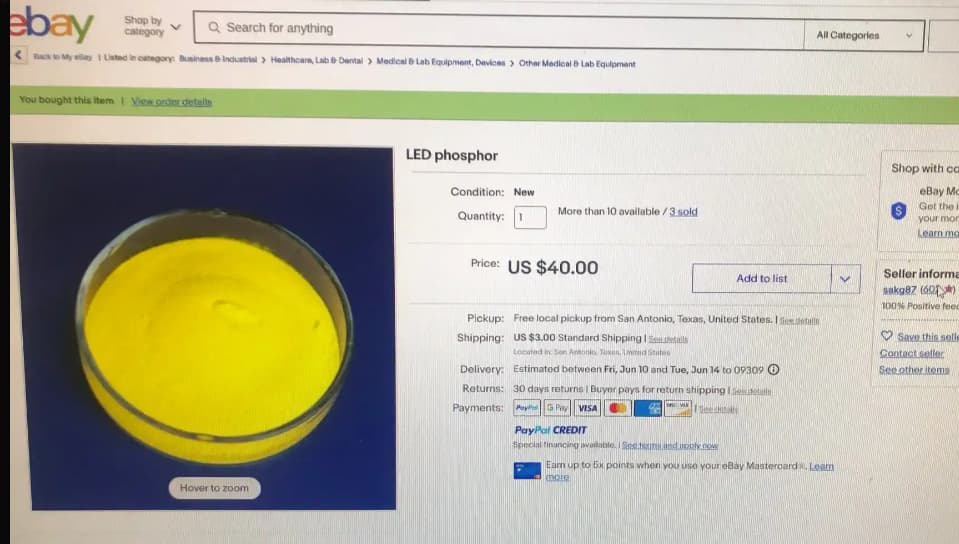 Looks like there is a theme of extreme pumping with blue.

Phosphor is good stuff. And that is not a bad price for a good quantity.

5700k is actually pretty warm for an LEP, warmer than i expected. do you know what kind of power they use to pump these phosphors in commercial LEPs like a Weltool W5? That ones a transmissive afaik. they all seem to be limited to less than 700 lumens, which is a lot less than i would expect if they were using a hefty diode like a NUBM44

From what I’ve been able to gather, the highest efficiency for LEP is about 300 lumen per watt of laser drive power, don’t know what the W5 uses. LED’s produce about 100-110 lumen per watt, but of course we can’t compare their efficiencies that way between a LEP and a LED because of the amount of power it takes to produce one watt of output from a laser diode.

Without doing the math, they might be fairly close to one another in regard to lumens per watt of input power, but the LEP can be collimated to a much tighter beam, of course. I need to look up the common efficiency of a blue laser diode used in the LEP. I believe I may have read somewhere the LEP is actually more efficient that way.

now that does surprise me, but that’s exciting to hear. you could definitely pump the largest of those phosphors with a NUBM44 without exceeding the damage threshold and see more like 2000 lumens even with losses and not peak conversion. exciting! i would certainly have fun with one even if it meant a short duty cycle

I know there is a high powered flashlight made for law enforcement called the W50 which probably has one of those high power blue diodes in it, I will go look for the URL now:

But, 1400 lumen. If they are using the NUBM44 then it is probably running at lower than max possible output power from the diode.

that’s right, the elusive W50, i bet you’re right. Even though heat sinking a phosphor to that degree doesn’t seem as straightforward as it sounds, we could build our own and be the envy of the flashlight enthusiasts hehehe

I would sure like to have a 2000 lumen LEP flashlight

My guess is the challenge is how much power the individual phosphor spots can take, so multi-LEP in one head would probably be a good way to go.

doing them side by side would increase the spot size, but i can’t quite visualize how that would affect the beam. you were thinking making a phosphor sandwich with sapphire bread and a powder filling, right? i do wonder how much more effective it would be than just a single phosphor. i betcha direct air cooling on the phosphor along with mounting it in a copper heat sink stack would be a good way to go for cooling

I was thinking of doing just that, two sapphire windows with phosphor sandwiched in the middle, I bought the windows and a chemist made the phosphor for me to do that, but I haven’t gotten around to doing so. I was thinking multiple diodes could excite the phosphor and work well. The lens is the question though, how to do the lens with that configuration.

If you’ve seen some of the YT videos of two, three or four LEP flashlights mounted together, due to the divergence, the beams join in the distance anyway.

BTW: sapphire is a good heat transfer material, heat can transfer through it fairly well into a heatsink.

That’s right, like the maxtoch owl eyes. two side by side feels goofy but three in a triangle, now that sounds badass. and my mistake, i thought you were going to sandwich the powder in between two already made LEP phosphors. Making your own phosphor with clear sapphire windows makes way more sense lol. I think that would work brilliantly! you can make the windows thicker for more heat conductivity, letting you get away with the multiple diodes on one phosphor spot like you were saying. gosh, imagine a 4000 lumen LEP beam cutting through the night. Who needs RGB lasers!

Yes, I hadn’t mentioned any of that, I was able to get the phosphor powder from a Phd chemist after I bought those sapphire disks.