Well my 488nm pointer arrived a while back and I tested it today and I was very happy with it I have to say.

It has to be my new favourite part of the spectrum for sure. Mine has a bit of green in it too, but not much. It is mostly pure cyan with a green tinge at certain angles.
I would place it between 489-490nm, but probably more towards 490nm I would reckon. Without a spectrometer I can not say for certain, but I have observed it for a while in different lighting conditions and am fairly sure it is closer to pure cyan than the 495’s.
Some others have received them at around 488-489nm, and others at the 493nm mark. So be aware that they do vary.

The host is a solid feeling object. It’s got a nice weight to it and doesn’t feel cheap. The waterproof aspect is good, however I haven’t tested this myself yet.
As shown in the picture, it is important to get the polarity correct as it is positive to the tail cap. The laser is focusable by turning the top section of the head.
The laser comes with a warning sticker. However it is a generic label so doesn’t actually identify the laser itself.

Here’s some quick pics. I have had to colour correct them the best I could, and to what I can see with my own eyes, as my phone camera picked it up as sky blue. The dot does carry a box reflection but the colour is so nice you don’t even care. Which is unusual for me. 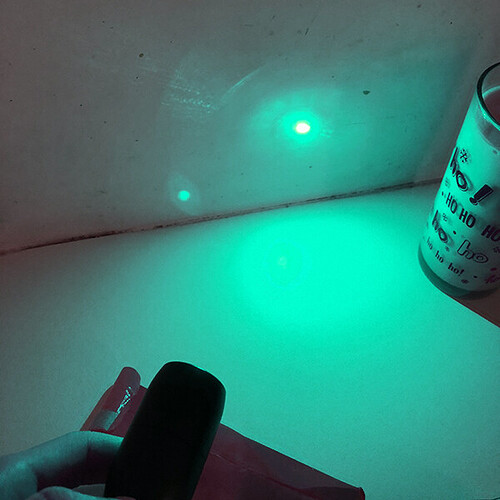 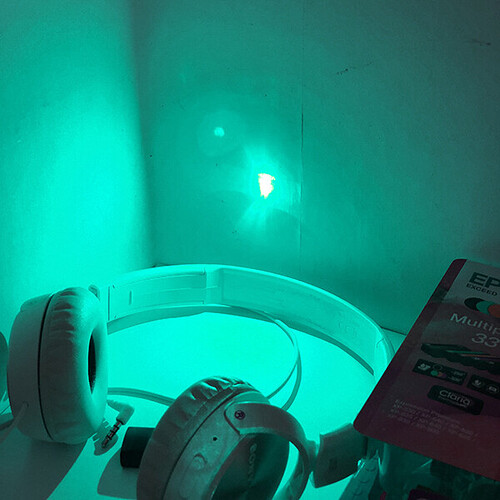 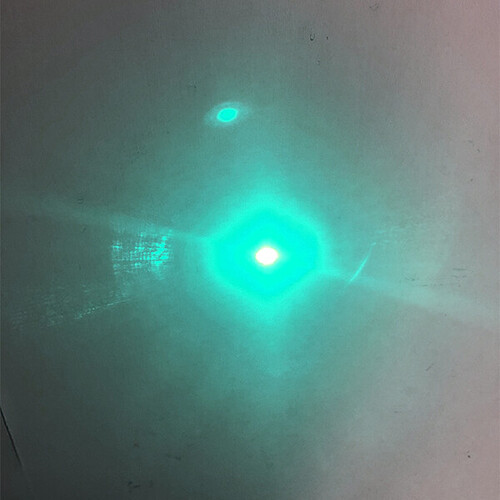 The tricky part however is describing the wavelength.
I will try and explain this as clear as possible, but unless you own a spectro’d sharp diode at 490-492nm then you can’t appreciate truly the colour. I know that 589nm appears more amber in the dark, and yellower in daylight. So I was expecting this to react similarly, but it is unlike anything I’ve seen before. I do not own a spectrometer myself, but based on the average colour I am perceiving, I have reason to believe that my laser is between 489-490nm. It is by far the most unusual and fascinating wavelength in my collection to look at IMO. I have never struggled so much to pin point a colour so much. To look at the dot, it looks light sky blue with cyan bloom, and then you see green tinges in the bloom depending on the lighting. And If I shift the dot around slightly into shadows, the colour changes again.

I have edited this picture to try and explain what I see in person. It is the best I can do to simulate what it looks like in room lighting. You’ll see the spot is bluer than cyan, the bloom surrounding the dot illuminates everything around it pure cyan. But then in places you’ll notice a slighter greener patch to the rest of the bloom.
This is a bad photoshop job so don’t take this picture literally, but you should get the idea. 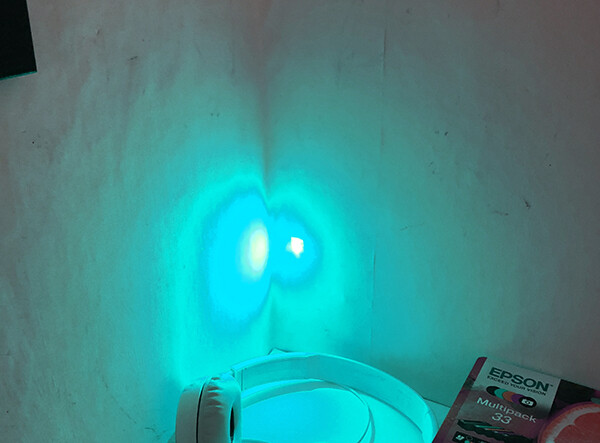 So because of this I decided to experiment a bit with lighting whilst shining through a grating. I didn’t get pictures of this as there was no point. I first checked to see if I could see any evidence of a broad linewidth like ZRaffleTicket noted here (link), although I don’t have a proper diffraction grating to test with only those diffraction headcaps which aren’t great. My thinking behind this was, if I am struggling to pinpoint the exact colour, it could be because there is multiple lines conflicting against each other. I didn’t notice any visible lines, but I can’t say for certain without a linear diffraction grating. But it did allow me to check the colour out in more detail by me observing the weaker dots. The lower intensity seemed to make it easier to tell the colour. In darker conditions, the dots appeared cyan-green a bit like 493/494nm. In bright lighting conditions the dot looked like 486-487nm. It was normal room lighting that gave the pure cyan looking dots. But when you take the diffraction grating away, it is like all of these colours seem to merge together but sometimes visually separate and you get this almost average of colours at nearly pure cyan with the slightest green tint. Has anyone else noticed this strange effect with this specific band in the spectrum? Is it that my/or our eyes can’t make this colour out 100%? I’m thinking that this is more a trick of the eye at this wavelength rather than anything to do with the diode. But it’s definitely odd.

To think I only spent $64 on a ~490nm laser. If you said that a couple years back it would of been unreal.
Overall this is a great laser for a great price. I highly recommend it to anyone.